QC Netball will be holding trials (dates below) to select up to two teams to represent the association at State Age Carnival, Maroochydore, 3-6 July 2021 (during school holidays). All teams will participate in at least two one-day representative carnivals.

Training will be held on Sunday afternoons at Downey Park until July (excluding school holidays), and our qualified and experienced rep coaches will provide advanced level training.

For Players attending State Age Carnival, there will be an additional fee of approximately $200 payable in May/June.

NOTE: STATE AGE CARNIVAL: Due to COVID uncertainty at the time, QC will NOT be accommodating teams at Maroochydore, and families will need to make their own arrangements for transport to/from the courts each day, and all meals. 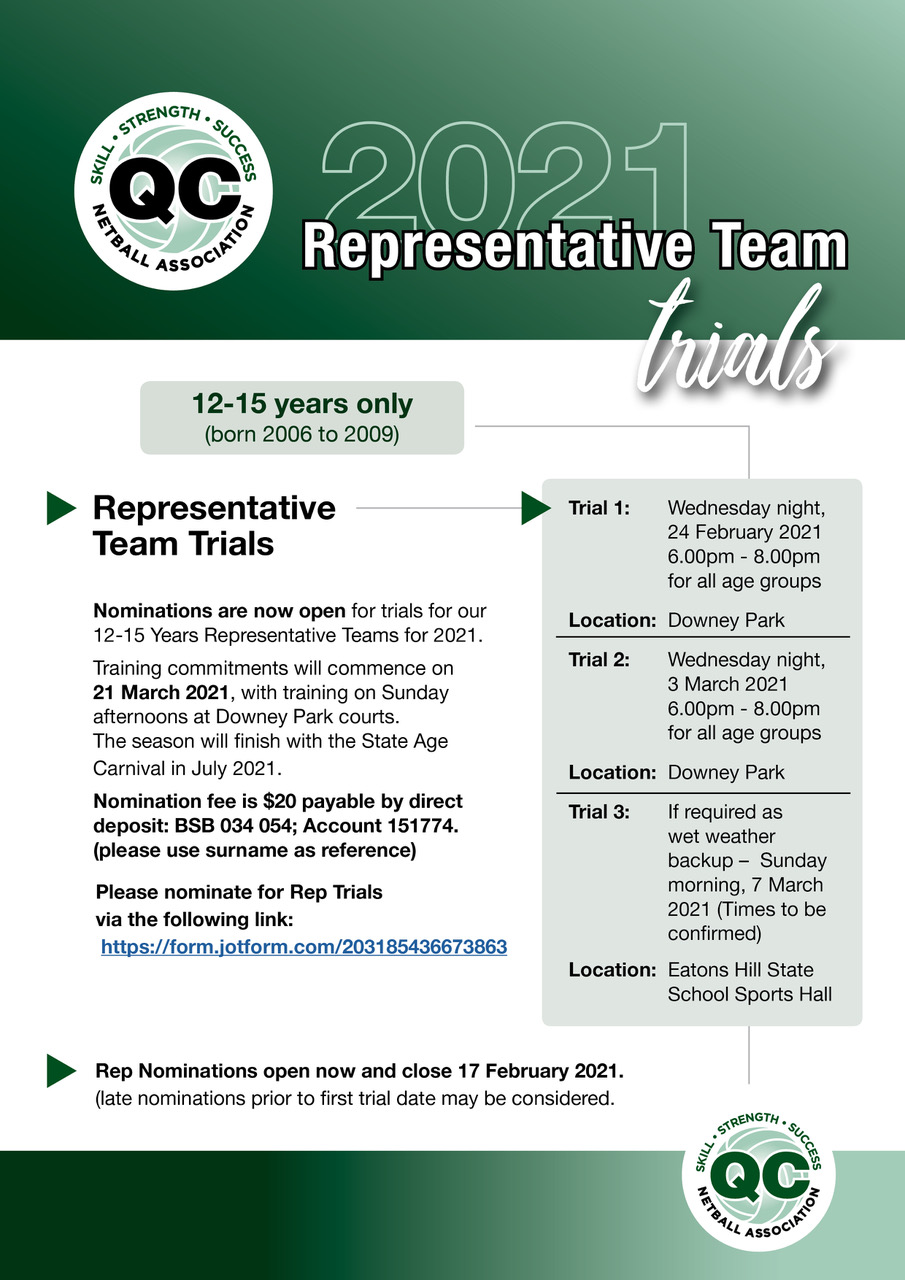 To provide players with the opportunity to represent QCNA at a level suitable to their ability; to provide opportunities for players to progress through Brisbane North Netball Region and Netball Queensland’s development pathways and to enhance player enjoyment of the game. Through the selection of teams, QCNA aims to:

The allocated trial start time will be the time that the trial matches begin. It is the players’ responsibility to register and warm up prior to the trials starting. Games will be approximately 10 minutes in length. Players will trial in their two (2) nominated positions, although players may be required to play out of position by the selectors to explore different combinations or if a certain position is over subscribed. Effort will be made to ensure all players (within each playing area) have equal court time. During the trials, the selectors will evaluate individual skill levels, fitness and team playing abilities of each player. The following aspects will also be considered: player combinations, coachability, attitude, leadership, communication, team dynamics and individual player characteristics.

A selection panel consisting of three selectors will be appointed for each age group, including the team coaches. All selectors have equal voting rights during the selection process. However, if the selectors are divided the head team coach has the final decision. Coaches not already on the Selection Panel may be invited by the selection panel to attend any discussion they may hold. Selector’s recommendations will be presented to the QCNA executive committee for final approval.

Consideration may be given to other factors that the selection panel considers in its sole discretion to be relevant and appropriate to the overall assessment of a particular player. These may include:

Selectors must submit a list of selected squads/teams with reserves for each playing area to QCNA Committee for ratification prior to final selections being announced.

In the event of a player(s) withdrawing after selection:

Players unable to attend trials for any reason will have their team selection based on availability of positions within the teams, information provided by the coach at the conclusion of the previous season and through consultations with the selectors, the coaches and QCNA Committee.

Squads will be named within two weeks of the final trial of all State Age teams.

Notwithstanding any of the provisions in this Policy, it is acknowledged that when applying the criteria and considerations set out above, there will be, at times, extremely difficult choices to be made which will require the Selection Panel to exercise its discretion and judgment. Providing the Selection Panel has properly considered the criteria and considerations set out in this Policy, and have exercised its discretion and judgment in good faith, then the Selection Panel will have fulfilled all of its obligations under this Policy. Players not selected in a team, may request in writing, feedback, by emailing administration@qcna.org.au